Quick Step into The Kingdom of Wonder - Cambodia

When I got back home from Southeast Asia, everyone was curious to know what it was like and what were my thoughts about it. I started saying: Vietnam is culture and incredible noodles, Thailand is paradise found, Bali is serenity and peace, Singapore is evolution, Philippines is tropical beaches and natural reserves. But then when I got to Cambodia I did not know how to describe it...

Cambodia lies in the heart of Southeast Asia and it is officially known as "The Kingdom Of Wonder" for its marvellous mosaic temples, beautiful beaches, culture and traditions. It's not been long time since Cambodia has emerged from the terror of war and massacre, opening itself to visitors with a smile.

Angkor Wat was one of the reasons why we packed our backpacks for the country. This is a temples complex located in Siem Reap and it is the largest religious monument and one of the UNESCO world Heritage site. We also wanted to visit the capital Phnom Penh and its Royal Palace and nearby Silver Pagoda.

My travel mate Peppe and I got to Cambodia by crossing the boarder on a speedy boat from Vietnam, arriving straight to Phnom Penh.

We checked-in in a good located and clean hostel "Bullabong Hostel" for $4 per person (double room), they also had a swimming pool which it was a life saver as we wanted to chill a bit after days backpacking from north to the south of Vietnam - you can check out my post by clicking here The Vietnam Diary, Day 1 of 10: Hanoi.

I do suggest you to rent a scooter to visit the city, that's what we've done straight after and... shall we?

It was late afternoon when we set off to the night market. It is quite small and very different from the usual Southeast Asia night markets: very wide between one stand and the other, well organised and calm as merchants are not screaming or hassling all the time. The atmosphere overall is charming. We had some food and we walk around until my gaze fell on a mesmerising souvenir that since then I always take with me.

Even if it is one of the poorest country of Southeast Asia, my first impression steeping into Cambodia was that it has made an impressive economic and social progress. The Capital Phnom Penh is one of the most ambitious metropolis I have experienced during my trip.

Cambodia’s Royal Palace was built in 1866 and it's a complex of buildings which serves as the royal residence of the King of Cambodia. There are few entrances to the palace: the Victory Gate reserved for royalty, the Funeral Gate that only opens after the death of a monarch, the Western Gate that was used to bring prisoners out of the palace to kill them in front of everyone and the Southern Gate that is the common entrance.

Buildings are painted in yellow to symbolise Buddhism – the main religion of Cambodia.

It is set in stunning neat garden and it has warm colours and green nature; I felt peace and calm just by strolling around the Royal Palace and the Silver Pagoda.

The pagoda was originally made of wood in 1892 and was rebuilt in concrete and Italian marble in 1962. Even if more than half of the pagoda’s riches was stolen and demolished during the Vietnamese invasion, what's left nowadays is still incredible.

The Silver Pagoda gives an intriguing insight of Cambodia’s past and present. The floor is made of five tonnes of gleaming silver, hence the name of the pagoda. Along the walls of the pagoda there are examples of intricate masks used in Cambodia classical dance.

Night was falling and it was time to keep moving. We caught a sleeping bus for $9 each and it was going to arrive at Siem Reap by 5 am. So I thought: cool, we can sleep and wake up ready for the much waited Angkor Wat… I was wrong! The journey has been terrible, the chauffeur was driving as quick as a flash and we could have doing nothing but pray to arrive in one peace. Awful!

At 3:30 the bus stopped in the middle of nowhere and the driver said that we where in Siem Reap. Thank goodness we did it! There were few tuk-tuk drivers offering bargains on prices to try to convince us to go in their suggested ones. Finally we decided to go with a guy that was suggesting a good located hostel with clean rooms for only a few dollars. It turned out it wasn't at all like he was describing it... The room given to us was dirty, dusty and even had filthy bed sheets. We asked for a cleaner one, but the service was slow and we didn't have time to waste so we decided to change our programs. We went to fix ourselves some coffee, admiring the sunrise of Angkor Wat.

At the hostel we explained we were going to leave and once again we negotiated with the tuk-tuk guy: we could leave our backpacks at the hostel and he would take us to Angkor Wat for the full day for a total of $20. We were a bit sceptical, but not problem as we always take our valuable belongings with us. So let's go!

Sunrise over the temple

We got to Angkor Wat just in time to see the sun rising up: something incredibly wonderful! You get wrapped up in such a powerful energy: serene silence, amiable air, golden glow. I was amazed by so much beauty and there was much more to come. There's something magical about this beguiling Buddhist temple that mesmerize travellers from all around the world.

Angkor Wat means "temple city" and it was built by Emperor Suryavarman II in the first half of the 12th century. Originally it was a Hindu temple, but by the send of the same century it becomes Buddhist.

As soon as you start exploring around you are going to be carried like in a different era. 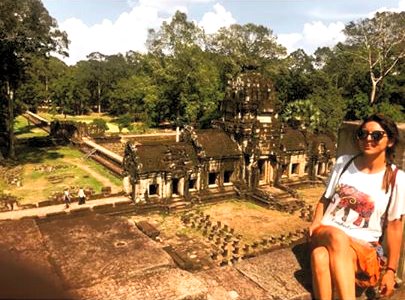 The tuk-tuk driver knew exactly every corner of Angkor Wat and he stayed with us for all day long driving from one temple to the other. It was extremely hot so were stopping a few times to buy water and to cool down a bit.

The temples that I loved the most are: Ta Prohm, Preah Khan, Angkor Thom, Banteay Srei and Bayon.

Most of the temples are closing by 5:30 pm and only few of them stay open until 7 pm so visitors can admire the mystical sunset of Angkor Wat. We wanted to cherish it from Pre Rup temple. To get there the steps on the way are very high and steep and we were quite tired from all the walking of the day and the lack of sleep from the night before, but let me tell you: (and for the fact we had no sleep the night before) but I tell you: the view was absolutely wonderful! It might be a difficult trip, but you sure do get rewarded in the end.

What you need to know

Wear a t-shirt that covers your back and a not too short shorts (or skirt). Make sure you are wearing confortable shoes: there is a lot of walking and climbing.

In the evening we checked-in for two nights at "Tropical Breeze Guesthouse" it is in a good location, it's clean and quite cheap. - Oh man, finally some sleep!

The following day we headed to the Siem Reap Old Market: typical Southeast's market that has souvenirs, food and Cambodia bits and bobs, definitely worth a visit.

In the late afternoon we got to the Aspara Dance Performance". There are few venues in Siem Reap where you can attend the traditional dance. We got tickets from the hostel that included buffet dinner and dance show that lasted for one hour.

The Aspara Dance performance is a truly mesmerizing art performance: the show has charming dancers, intricate costumes and interesting lights, it is definitely one of the cultural elements of Cambodia no that one should miss.

The evening we went with a scooter to the pub street, a busy area where there are lots of sites that have cheap beers, good food and massages stands. Definitely the street has such a lively atmosphere. There we treated ourselves with a fish pedicure: I am really ticklish so you can imagine how fun that was for me! Later on we went for a walk at the night market, where we bought there some cheap souvenirs and had a beautiful relaxing massage, we loved it!

Last but not least my travel mate had a "tasty" insect dinner at "Bug Café". - click here to check it out

Now is time to leave but you will always be part of my greatest memories.

Cambodia is all a passionate traveller is looking for: it is a superb country, strong culture, customs and religion.

East of Eden - The Best of Southeast’s Food